After her recent outstanding performances at the World Cup, gaining two second place spots during the Nakiska, Canada and d’Idre Fjäll, Sweden races, Marielle Berger-Sabbatel is confidently and eagerly preparing to compete in Korea.

The resort of Les Arcs is fully ready to support their champion, and there is no doubt that everyone there will be holding their breath come Friday 23rd February as the Ski Cross event is broadcast on the big screen.

Marielle Berger has been one of the Team Les Arcs athletes for 8 years, and has always displayed talent and a stubbornness to succeed. In fact, despite a big fall early in the 2015 season, which caused her a double fracture to her vertebrae and the need to wear a brace, and a second injury causing multiple fractures to her foot in 2016, Marielle was back on her skis last Winter and even mounted the steps of the podium 3 times during the season!

This Winter has seen the start of another successful season, already gaining second place position in the World Cup three times over (in Innichen in Italy, Idre Fjäll in Sweden and Nakiska in Canada) and she has now risen to 5th place in the overall World rankings.

An exceptional recovery after such injuries.

At the moment Marielle feels on good form, and is looking forward to participating in Korea. «I am going with the sole purpose of coming back with a medal. I am so motivated that I am even taking my ski boots in my hand luggage to make sure they arrive safely with me ! »

Born in 1990, she discovered skiing at a young age with her father, a ski instructor in Les Arcs. She naturally integrated into the Les Arcs Ski Club where her coaches at the time gave her a taste for competition and the knowledge to better herself. Speaking today about them, she says « They taught me to ski in all conditions and gave me an essential technical background. They forged the way for me on skis, I owe them a lot». At the Les Arcs Ski Club she often meets up with her long standing coach Enak Gavaggio, himself a champion of the Ski Cross discipline, and it was in 2011 that she chose to follow his example.

A head made for an accomplished athlete

Marielle is always smiling, discreet, and humble - one wouldn’t believe it of a Ski Cross racer, where aggression and ferocity are an integral part of the game. And yet, her self control, her intelligence on the slope and her patience are visibly what sets her apart. An accomplished athlete, her flawlessness can not only be measured on skis. Alongside the competition, she obtained a BTS in management in E-Learning.

The supporters get prepared in Les Arcs

All the resort will be decorated in Marielle’s colours, with posters, banners, French flags… Starting at 2 o’clock in the morning, supporters will meet in front of the ski school to follow Marielle’s race live on Friday 23rd February, on a giant screen installed in front of the Arc 1800 ski school. The race will then be rebroadcast on the big screen for the public later on in the day.

Entertainment, mulled wine and hot chocolate will be given out, to warm up the atmosphere. 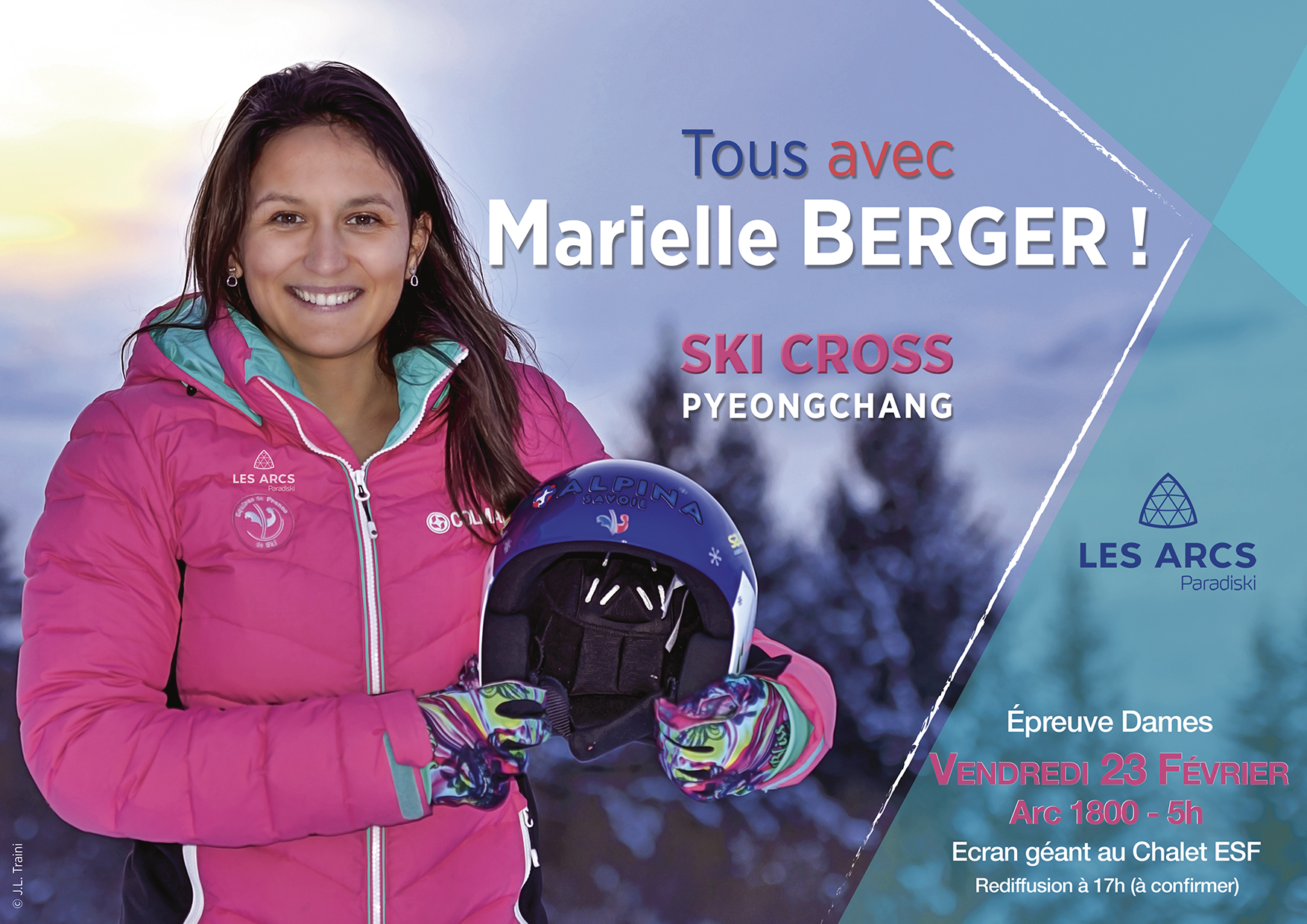