Before the attraction of White Gold, Bourg Saint Maurice lived exclusively off its land. For over 100 years, the Pré de Foire (show ground) on the heights of Bourg Saint Maurice, donned its autumn colours and played host to calves, bullocks, cows, sheep, pigs etc. This traditional fair was the essential gathering for all the region’s livestock farmers who came to buy livestock that had benefitted from the high-level pastures during the summer.

The Mountain Agricultural Show, founded in 2013, attempts to recreate the spirit of this fair in the centre of the old Borough, in a spirit of sharing, knowledge and savoir-faire.

In the past, the Canton de Bourg Saint Maurice was essentially a cattle-breeding region.

Large livestock fairs were held throughout the Tarentaise in Aime, Moûtiers and Bourg. In spring, they enabled herds to be built up before being taken up to the high-altitude pastures. In autumn after being brought down off the mountains, the beasts were sold before the winter. 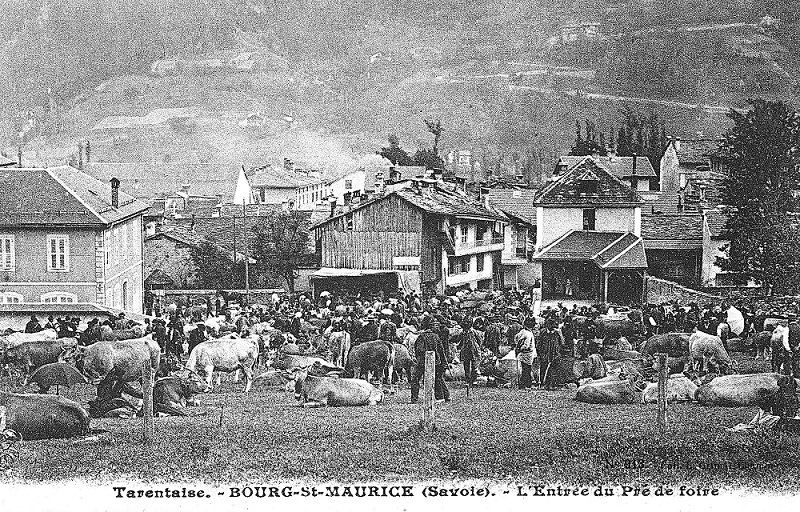 The Bourg autumn fair was one of the most important in the region, as well as being one of the oldest. It was authorised at the request of the commoners in 1473, by Yolande de France, wife of Amédée IX and sister of Louis XI, at the time Regent of the Duchy of Savoie. Its exact date changed over time. Originally fixed on 10 to 12 September, it then changed twice: 4 to 5 September (or a few days later) «returning» to 27 and 28 of the same month (known as the «fair of Saint Michel »).

All the livestock farmers in the canton, and even from the surrounding villages, would come to sell their animals. The day before, the herds would come down from the high-altitude pastures and were herded into the orchards neighbouring the town. That was when a large number of « unofficial » transactions took place. The following day, the livestock was allowed into the fairground, from the rue de la Chaudanne to the pré Saint-Jean.

At the beginning of the century, the fair attracted 1500 to 2000 head of livestock. The town would be buzzing with excitement for the occasion and the hotels were full for three of four days. Stallholders and street vendors took over the streets as the farmers who came down to sell their animals used the proceeds to buy what they needed for the next few months: clothes, tools and manufactured goods. They also took the opportunity to go and see the notary or the doctor. A tourist guide dating from just after the war described the atmosphere of these special days, « The town has to be seen on 8 September. Most of all it has to be heard. There is nothing but cheerful peels of bells, and the bells sounded by the « queens » of the herds. Everywhere, people are crumpling blue notes, chasing escaped animals and yelling and shouting ».

While pigs, sheep and mules were sold, the undisputed star of the show was the Tarine cow. This breed, peculiar to the Tarentaise, was revealed to the general public at the Montbrison regional show in 1857…before Savoie became French. Local breeders set up a herd-book in 1889 and through selective breeding obtained today’s Tarine with all its characteristics. These magnificent animals with « Alpine feet » have remarkable qualities of endurance and calm, much sought after for export. It is worthy of note that there are few provincial areas today where the animals are so well cared for, groomed, combed and washed regularly…

Up until the 1950’s, buyers came from all over Savoie and the Dauphiné, as well as Burgundy, Italy and North Africa. Dealers would charter whole trains for the animals they had bought. As for the slightly older dairy cows, they were sent for a rest period before going back into production the dairymen in the cities.

Today, the fair has lost its importance as much for cattle sales as from the point of view of local trade. Part of the fairground has, moreover, disappeared in the face of rampant urbanisation! There are fewer livestock farms and livestock sales take place at any time of year. In mid-April, the agricultural show rewards « the flower of Tarentaise breeding », but farmers no longer proudly attach the plaques they win to their houses as they did in the past…

To find out more…